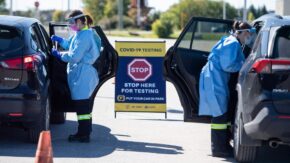 Infections since the beginning of the pandemic have surpassed the 300,000 mark with the two hardest-hit provinces, Ontario and Quebec, continuing to report more than one-thousand daily new infections and a sudden spike in Nunavut triggering a two-week lockdown. Nationwide, there have been 11,027 deaths attributed to COVID-19. The vast majority of the deaths have been linked to long term care homes.
Meantime, Canada’s Health Minister Patty Hajdu says she is encouraged by early reports of positive results from testing of a second COVID-19 vaccine released yesterday.
“And that’s exactly the light at the end of the tunnel that I’m speaking about, “Hajdu explained on Monday, “The fact that we now have two promising vaccines and both that Canada have options to purchase, as you know, is good news, but it is also early news. There are a number of steps that have to be completed with any vaccine to make sure that it is in fact safe for Canadians.”
A week after Pfizer and BioNTech announced their COVID-19 vaccine candidate appeared to be 90 per cent effective, Moderna reported early data Monday on its vaccine suggesting a 94.5 per cent effectiveness rate.
The governing Liberals have deals to buy millions of doses of both if they’re approved.
Here in Ontario, Health Minister Christine Elliott says distribution plans are in the works.