For the second time this month, there’s promising news from a COVID-19 vaccine candidate. 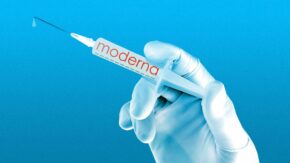 Word from Moderna Monday, its shots provide strong protection against the new coronavirus.
According to preliminary data from the company’s still ongoing study, the Moderna vaccine is 94.5 percent effective.
A week ago, competitor Pfizer Inc. announced its own COVID-19 vaccine appeared 90 percent effective — news that puts both companies on track to seek permission within weeks for emergency use in the U.S.
A vaccine can’t come fast enough, as virus cases topped 11 million in the U.S. over the weekend — 1 million of them recorded in just the past week. The pandemic has killed more than 1.3 million people worldwide, more than 245,000 of them in the U.S.
Moderna shares rocketed higher on the announcement and appeared to be headed for an all-time high Monday. The Cambridge, Massachusetts, company’s vaccine is among 11 candidates in late-stage testing around the world, four of them in huge studies in the U.S.
Both Moderna’s shots and the Pfizer-BioNTech candidate are so-called mRNA vaccines, a brand-new technology. They aren’t made with the coronavirus itself, meaning there’s no chance anyone could catch it from the shots. Instead, the vaccine contains a piece of genetic code that trains the immune system to recognize the spiked protein on the surface of the virus.
The strong results were a surprise. Scientists have warned for months that any COVID-19 shot may be only as good as flu vaccines, which are about 50 percent effective.