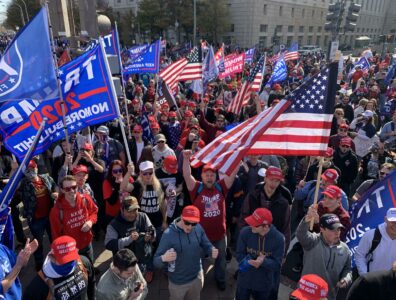 Trump himself returned the favour Saturday morning, directing the presidential motorcade to loop around Freedom Plaza where supporters had already gathered.
His devotees hoped to mount a spectacle reminiscent of a Make America Great Again rally in the centre of a city known for being fiercely liberal.
Detractors, meanwhile, were expected to stage counter-protests of their own.
On Friday, judges in the swing states of Arizona, Michigan and Pennsylvania all dismissed court challenges aimed at overturning the results of the vote.
And the Department of Homeland Security has declared the November 3rd election to be the most secure in U.S. history, finding no evidence of electoral fraud.