CANADIANS ASKED TO COMMEMORATE REMEMBRANCE DAY PRIVATELY DUE TO PANDEMIC

We Canadians are being encouraged to stay home on Remembrance Day, while marking the service and sacrifice of those who have given their lives to defend the country. 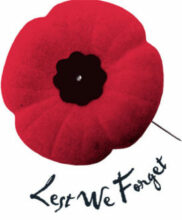 Because of the pandemic, the Royal Canadian Legion is explicitly discouraging Canadians from attending Remembrance Day ceremonies in person this year.
The legion is promising through it’s website to include many of the traditional elements of the ceremonies, such as the playing of the Last Post, singing of In Flanders Fields, and fly-bys of military aircraft.
There will also be a special emphasis on the 75th anniversary of the end World War II.
But most observances of Canada’s wartime sacrifices are expected to be extremely small, including here in Toronto at Queen’s Park and the Old City Hall cenotaph, along with Ottawa where there will be only 100 people in place of the 30,000 who normally turn out for the national ceremony.
On this Remembrance Day, there is also a moving display at the Sunnybrook Veterans Centre with 37,500 Canadian flags placed in the lawn outside the building. There are 100 flags for each veteran who lives at Sunnybrook Veterans Centre.