A strengthening Tropical Storm Eta cut across Cuba on Sunday, and forecasters say it’s likely to be a hurricane before hitting the Florida Keys Sunday night or Monday. 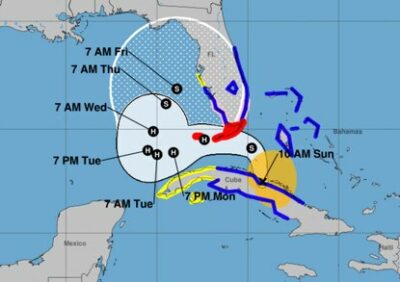 The storm already has left scores of dead and over 100 missing in Mexico and Central America, where it hit last week as a major hurricane.
Hurricane and storm surge warnings were posted for the Keys from Ocean Reef to the Dry Tortugas, including Florida Bay.
The storm had maximum sustained winds of 100 kilometres per hour Sunday morning and it was centred over Cuba about 380 kilometres south-southeast of Miami.