It was the Beatles album that gave the world “Yesterday” the most covered song of all time. 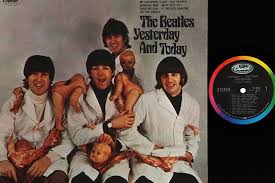 Now, a rare Canadian copy of the Beatle’s controversial “butcher cover” from “Yesterday and Today” is heading to auction November 14th.
The album’s cover depicted the band in butcher smocks covered with decapitated baby dolls and raw meat.  It was was eventually pulled from worldwide distribution, ordered destroyed and replaced.
However, a promotions manager with Capitol Records Canada managed to hide several away, one of which will be auctioned by Heritage Auctions next weekend.
The last time a “butcher cover” copy of the album went to auction, it sold for $232,000.  It had been owned by John Lennon and signed by all four memebers of the band.