Joe Biden is on the brink of winning the U.S. presidency. 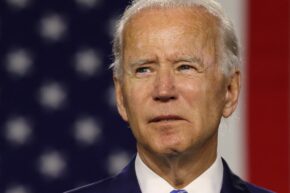 As of this writing at 8am on November 5th, former U.S. vice president and democratic challenger needs to clinch just one more battleground state to defeat Republican incumbent Donald Trump.
Biden has not claimed victory, but he told supporters in Wilmington, Delaware last night once all the ballots are counted it appears he will come out ahead.
Biden is currently at 264 electoral college votes, while Donald Trump is at 214. A total of 270 or more is needed to clinch the White House.
Dozens of angry supporters of Donald Trump converged on vote-counting centers in Detroit and Phoenix as returns went against the president in the key states of Michigan and Arizona.
At the same time, thousands of anti-Trump protesters took to the streets in cities across the U.S. demanding a complete count of the ballots in the still undecided election.
The protests came as the president repeatedly insisted on Twitter without evidence that there were major problems with the voting and the ballot counting, and as Republicans filed suit in multiple states, preparing to contest election results.
So far, Joe Biden has received more than 71 million votes for president … the most in U.S. history.