TRUMP CLAIMS FRAUD WHILE BIDEN CALLS FOR PATIENCE WITH NO CLEAR WINNER IN THE U.S. ELECTION

As of Wednesday morning, there is no winner in the U.S. presidential election.
Races remain too tight to call in several battleground states. 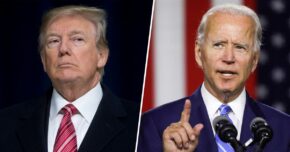 As of this writing (7am) Democratic Challenger Joe Biden has 238 electoral college votes, while Incumbent Republican Donald Trump has 213 electoral college votes.
270 votes are needed for victory.
Still, U.S. President Donald Trump held an early morning news conference at the White House, where he declared he would ask the U.S. Supreme Court to weigh in on the inconclusive election.
Trump went so far as to call the process “a major fraud on the nation.”
“We want the law to be used in a proper manner, so we’ll be going to the U.S. Supreme Court, we want all voting to stop, we don’t want them to find any ballots at 4 o’clock in the morning and add them to the list. It’s a very sad moment, and we will win this, and as far as I’m concerned, we already have won,” Trump falsely declared.
There is no evidence of foul play in this election cliffhanger.
Prior to Trump’s early morning address, Joe Biden spoke to his supporters at a drive in event, saying his hopes for victory remain high despite the uncertainty.
“We could know the results as early as tomorrow morning, but it may take a little longer,” Biden explained, “As I’ve said all along, It’s not my place or Donald Trump’s place to declare who’s won this election, that’s the decision of the American people. But I’m optimistic about this outcome.”
So far, Trump has picked up the battleground states of Texas, Florida, Iowa and Ohio, while Biden carried New Hampshire and Minnesota.
Arizona, Michigan, Pennsylvania and Wisconsin are among the states too close to call.
As for the House of Representatives and the U.S. Senate, Democrats have driven toward extending their control of the House for two more years but with a potentially shrunken majority as they lost at least six incumbents and failed to oust any Republican lawmakers in initial returns.
Democrats had a disappointing election night in the Senate as Republicans beat back an onslaught of challengers as they tried to retain a fragile majority. Several races remain undecided and at least one headed to a runoff in January.
Listen for in-depth analysis with an American panel of political experts on Zoomer Radio’s Fight Back with Libby Znaimer after Wednesday’s noon news.