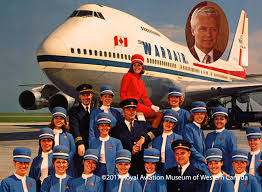 Max Ward, the bush pilot turned Canadian aviation pioneer, who founded Wardair in Yellowknife in 1953, has died.
By 1989, the airline would become the third-largest in Canada.  He sold it to Canadian Airlines later that year.
Ward’s family described him as “a true Alberta maverick,” who launched his commercial service with one 14-passenger single-engine Otter that operated on wheels, skis and floats.
Max Ward was inducted into Canada’s Aviation Hall of Fame in 1974, and made an Officer of the Order of Canada in 1975.
Max Ward was 98.