The pandemic has shuttered many cultural attractions. But the Juno Beach Museum in France is determined to keep its doors open by enlisting the help of a 96-year-old Canadian Second World War vet, who landed on Juno Beach when he was just 19. 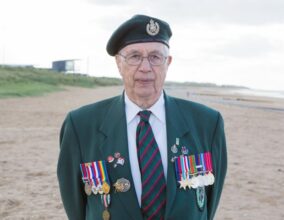 Jim Parks is this year’s ambassador for the Remembrance Day Virtual Races to raise money for the war museum in France where Jim has visited on a number of occasions but has vivid memories of the first time he landed on the beach, steps from the centre.
“Our boat was hit and we were sort of ditched into the water and I got side swiped by another board into the water coming in and swallowed a lot of water and ended up on the beach and I had no weapons, I had nothing left,” recalls Jim. 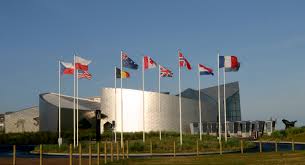 Alex Fitzgerald Black is with the Canadian charity that owns and operates the museum in France.
“Jim is just the perfect ambassador I have to say,” says Black.
Last year on the 75th anniversary of D-Day, a record 100,000 visited the centre that relies heavily on tourism. Then the pandemic hit.
“We’ll be lucky to get one third of that and the way things have really fallen off since the summer ended suggests that even those projections are probably a little optimistic.”
This virtual walk or run event not only raises money but honours the 45,000 Canadians who died in the war. The three distances all hold special connections to Juno Beach.
“The shortest distance is 1,500 metres and that’s called the Strongpoint that’s named for the stretch of beach Jim Parks’ regiment captured on D-Day,” says Black.
The 8 kilometre run is the length of Juno Beach east to west and the 21.1 kilometre or half marathon represents the 21,000 thousand allied troops who landed on Juno Beach June 6th, 1944.
For more information and to register for the event visit
Listen to Christine’s report here.