A super typhoon has killed at least 10 people in the Philippines and triggered volcanic mudflows that engulfed about 150 houses before weakening as it blew away from the country. 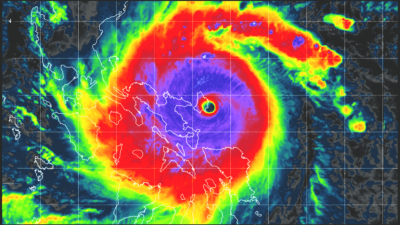 Typhoon Goni blasted into Catanduanes province at dawn Sunday with sustained winds of 140 miles per hour and gusts of 174 miles per hour.
The government’s weather agency said Goni had threatened to sideswipe Manila but shifted southward and spared the capital.
At least nine people died in Albay province, including a father and son who stayed put in a community of 150 houses that was hit by mudflows from Mayon Volcano while other residents evacuated to safety.
One other typhoon victim died in Catanduanes.