A Shakespeare First Folio, going to auction in New York, had a conservative sales estimate of between $4 and $6 million. 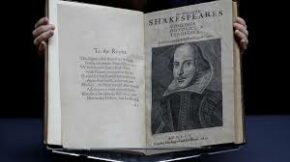 It sold yesterday at Christie for a record $9.98 million.
The book, which was published in 1623, seven years after Shakespeare died, was the first collected edition of the Bard’s plays.  More than 200 copies are known to exist, but only a handful of complete versions are thought to be held in by private collectors.
The edition sold yesterday was the first complete copy to go to auction since 2001.  That sale set the previous record of just over $6 million.