Ontario’s long term care minister is facing criticism for agreeing with a reporter that COVID-19 fatality numbers in long term care are comparable to a bad flu year. 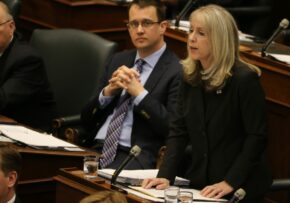 Dr. Merrilee Fullerton had been asked about a column in the Toronto Sun that argued the first wave of the pandemic “really was not that much worse than a bad flu season when it came to fatalities for our most vulnerable.”
Fullerton said it is a reflection of how vulnerable people are in long-term care and that “it really speaks to the neglect of the sector over many decades.”
“The numbers do indicate, if you actually measured the flu season, from 2017 into 2018, the numbers are comparable,” she said. “But I don’t want to talk about numbers. You know, it is about people.”
Dr. Merrilee Fullerton’s comments have angered opposition politicians including NDP leader Andrea Horwath.
“Horrifyingly insensitive to simply suggest that the worldwide pandemic that we’re in is something that’s akin to a bad flu. I mean let’s face it, thousands of people have lost their lives,” said Horwath.
Mount Sinai Geriatric Specialist Dr. Samir Sinha calls Fullerton’s analysis “damn lies”.
Dr. Sinha says there were more than 1700 deaths in long-term care during April and May, a 47 percent increase compared with the average for that time period in recent years