A call to action to address the staffing crisis in long term care is the focus of protests to be held Thursday in about two dozen locations across Ontario including at Queen’s Park.
“The government has to have a plan,” Advocacy Centre for the Elderly Lawyer Jane Meadus told Zoomer Radio’s Fight Back with Libby Znaimer, “They have to make sure that they are not treating long term care homes as second class citizens under hospitals. I think that’s a huge thing.” 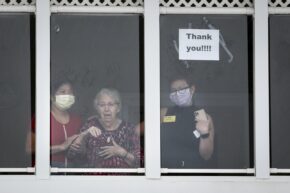 Meadus went on to say the Ford PCs also need to rethink visitor protocols, suggesting they can’t restrict visitors because “people are dying because of their isolation.”
Meadus is among the advocates who say the recent funding and staffing announcements by the provincial PCs are far less than what’s needed.
They are calling on the Ford Tories to take immediate action to recruit and train staff for nursing homes, improve pay and working conditions and provide full time employment.
Last week, the premier announced a $3-an-hour wage increase for personal support workers in long term care and a $2-an-hour increase for PSWs in hospitals. The pay bumps are to end in March but he’s promising to do everything he can so the increases become permanent.
Meantime, the PCs have announced the Unity Health Toronto Hospital will temporarily manage a COVID-19 outbreak at Toronto’s Norwood Nursing Home.
According to a release from the province, the 60-bed facility near King and Dufferin has a total of 26 confirmed cases among residents and staff.