A commission inquiry into the devastation caused by COVID-19 in Ontario nursing homes has been told the Ford PCs at Queen’s Park did not act on warnings issued in late January. 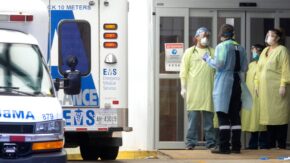 Donna Duncan, CEO of the Ontario Long Term Care Association, explained in an online submission Tuesday, that despite the warnings, an action plan by the Tories did not come until mid-April when at least 144 residents had already died in 100 outbreaks of COVID-19.
Duncan explained the government was asked in late January to free up inspectors to point out shortcomings that the highly contagious virus could exploit in nursing homes, many of them older with rooms holding three or four residents that fuelled the spread.
She added that complicating the response to the virus in long term care were government cuts to pharmacy services, long standing staff shortages, a lack of personal protective equipment and government insistence on inspections for compliance with pre-pandemic regulations, instead of preparing homes for the relentless onslaught of COVID-19.
David Cravit is a demographic expert and Vice President at ZoomerMedia. He told Zoomer Radio’s Fight Back with Libby Znaimer, the stories that are coming out of this inquiry are important.
“Anything that puts the personal into the picture as opposed to the statistical is very valuable, although the big number is important because that gets the attention of the politicians to react, but in the end is a series of individual tragedies, in a system that should have done better. There was no reason for many of these deaths and there was no reason for the neglect along the way,” Cravit explained.
More than 1900 nursing home residents and 8 staff members died after contracting COVID-19.