TORONTO SANTA CLAUS PARADE TO GO ON BUT WITHOUT A CROWD

For the first time in its more than 100-year history, Toronto’s Santa Claus Parade will go ahead without a crowd lining the parade route.

Toronto’s mayor said Friday morning he’s spoken with Santa Claus and this year’s parade will go on but will be take place in a way that families can enjoy safely. 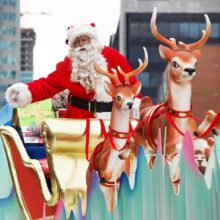 “He informed me, and Mrs. Claus did, that they’re not going to have the regular parade because of the obvious crowd implications, John Tory told CP24, “But they are on December the 5th going to have a spectacular televised rendition of the parade.”

“It is going to be as colourful and interesting as anything you’ve ever seen,” he said. “(It is) the same one you are familiar with. A lot of the floats and bands and the whole thing.”

The event will be staged in a closed set parade route.

A series of popular festivals and events have been cancelled this fall and winter in the wake of COVID-19 pandemic, including the Distillery District Christmas Market and the New Year’s Eve celebration in Nathan Phillips Square.

Mayor Tory says as for Halloween, he doesn’t have the power to cancel it, but he says the public health experts are working on providing guidance soon.