After first refusing to work on his piano, he became Glenn Gould’s favourite tuner and his work is heard on dozens of Gould’s records. 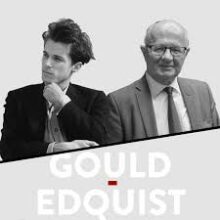 We’re just learning of the death of Verne Edquist.
As a piano tuner, Edquist spent his career tweaking the infinitely complicated mechanical actions under the lids of pianos in Toronto.
He was known to prick hammers with needles to give the sound different characteristics. He also adjusted tiny parts with names most pianists don’t know like…wippens, agraffes, knuckles and backchecks.
And not only did he tune Glenn Gould’s piano, he worked for musicians like Duke Ellington, Arthur Rubinstein, Victor Borge and Liberace.
Verne Edquist has died at the age of 89. His son Carl says the cause was kidney failure.