U.S. President Donald Trump is now among a group of a few world leaders who’ve been infected with COVID-19.

Trump tweeted early on Friday, “Tonight, @FLOTUS (First Lady Melania) and I tested positive for COVID-19. We will begin our quarantine and recovery process immediately. We will get through this TOGETHER!” 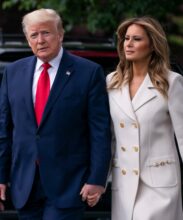 Two hours earlier, the U.S. President tweeted that one of his campaign staff, Hope Hicks, had tested positive for the virus and that he and Melania were waiting for their own test results.

Trump also told FOX News Channel, he had been travelling with Hicks for campaign appearances this week.

The U.S. president spent much of the year downplaying the virus, which has led to the deaths of more than 200,000 people in the U.S. He has scoffed at masks, and berated governors who’ve kept virus restrictions in place.

The White House physician says the 74 year old president is expected to be able to carry out his duties without disruption. The first lady tweeted that they are both feeling good and urged others to stay safe.

Other world leaders who’ve become infected with the virus include Brazil’s president, along with the presidents of Honduras, Guatemala, Bolivia and Belarus.

Here in Canada, the wife of Prime Minister Justin Trudeau, Sophie Gregoire Trudeau, tested positive for COVID-19 in the early days of the pandemic after returning from the U.K.