The Sunday School teacher from Plains Georgia, who became President of the United States, turns 96 today. 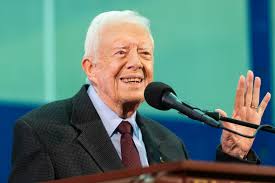 James Earl Carter Junior was the 39th chief executive of the United States.

Carter has lived the longest of the 44 men who have held the office and was planning to celebrate his birthday at home with Rosalynn, his wife of 74 years.

Carter served one term in the White House, from 1977 to 1981, survived a dire cancer diagnosis in 2015, continues to teach Sunday School and helps build houses for Habitat for Humanity.