Today is the 40th anniversary of the Terry Fox Run. 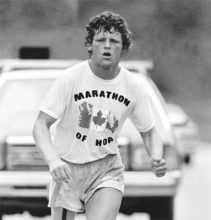 And while the event is going digital, like other events and fundraisers of its kind, that’s not dampening the spirits of those who take part.
People have been asked to take part in their own races in their own parks and communities while registering and fundraising online.
The Terry Fox run isn’t just a Canadian event. People take part in the run worldwide, all raising money for cancer research.
Fox started the marathon of Hope on April 12th, 1980. He was forced to stop on September first of that year near Thunder Bay.
He died on June 28th, 1981.