GRADUAL RETURN TO WORK AT MONTREAL PORT AFTER TRUCE WITH EMPLOYER

Longshore workers at the Port of Montreal headed back to work Sunday, after a truce declared in a labour dispute allowed activities to resume after a 12-day strike. 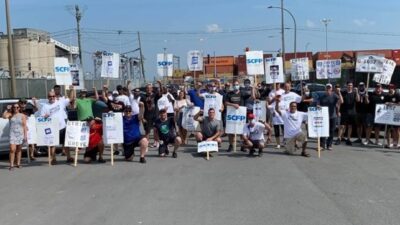 The two sides announced on Friday that they’d reached a deal putting the labour action, which left thousands of containers untouched on the docks, on hold.

The deal lays out a seven-month period where talks will continue without a threat of work stoppage.

Both sides said this week they’re confident a deal can be ironed out before March 20th, 2021, at which point the agreement would end.

The longshore workers, who have been without a contract since September 2018, say the strike that began August 10th revolved largely around wages and scheduling.

The labour dispute diverted at least eight container ships to ports in Halifax, Saint John, New Brunswick, and New York City, affecting thousands of importers and exporters and halting most of the 2,500 trucks that roll in and out of the port daily, according to the Maritime Employers Association.