Toronto Raptors head coach Nick Nurse has been named the NBA coach of the year. 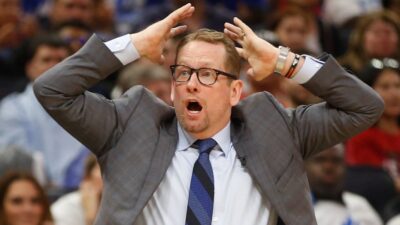 The award was announced on TNT’s pre-game show before the Milwaukee Bucks faced the Orlando Magic at the NBA’s campus at Walt Disney World near Orlando, Florida.

Raptors guard Kyle Lowry presented Nurse with the Red Auerbach Trophy while the coach was interviewed by the show’s panel.

Bucks coach Mike Budenholzer and Oklahoma City coach Billy Donovan were the other finalists for the award.

Nurse is in his second season as Raptors head coach.

The club went 53-19 in the pandemic-shortened 2019-20 regular season and posted a franchise-best .736 winning percentage.