Actor Tom Hanks is cementing quite a relationship with things Canadian. 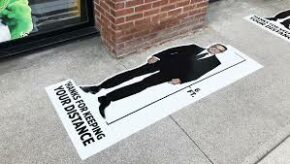 Not only is he the mascot for social distancing at Ontario liquor stores, the 64-year old is currently starring in the movie “Greyhound”

He plays a US Navy officer leading a convoy of vessels during the Battle of the Atlantic during World War II.

There are a number of Canadian connections to the film.  Midland, Ontario’s Gordon Laco was the film’s naval consultant and used the dimensions of H-M-C-S Sackville in Halifax to serve as the fictitious Canadian escort ship H-M-C-S Dodge.

He also got the crew to film scenery shots aboard H-M-C-S Montreal for a week at sea in January 2018, to help depict the dramatic winter waves and sky of the North Atlantic.