GTHA mayors are looking at the possibility of making face coverings mandatory in public areas where physically distancing isn’t possible. 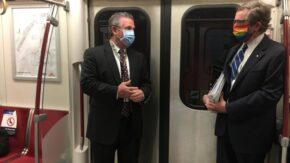 As things stand now, masks are only recommended at places like grocery stores.

The matter of masks will also be discussed as Toronto city council holds a virtual meeting today and Tuesday.

A number of cities are already jumping on the mandatory mask bandwagon. Kingston has imposed a rule and will even fine those who don’t comply.

Premier Doug Ford has said there will be no provincial rule imposed as it’s too difficult to enforce.