CANADA HAD DOUBLE THE COVID-19 LTC DEATHS THAN AVERAGE OF 16 OTHER DEVELOPED NATIONS: CIHI REPORT

As the COVID-19 crisis begins to ease in Ontario’s long term care homes, there is some disturbing news which confirms what leading Canadian geriatrician Dr. Samir Sinha first told Zoomer Radio News back on May 10th.

“Canada currently has the dubious honour out of fourteen countries of having the highest death rates of long term care in the world,” Dr. Sinha revealed. 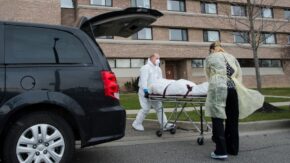 Now a new study finds the proportion of Canadian COVID-19 deaths that have occurred in long term care facilities is about twice the average of rates in other developed nations.

The analysis released Thursday by the Canadian Institute for Health Information provides a damning snapshot of senior care as of May 25th, when LTC residents made up 81 per cent of all reported COVID-19 related deaths in Canada, compared with an average of 42 per cent among all countries studied.

In the study of 17 nations, the proportion of long term care deaths ranged from less than 10 percent in Slovenia and Hungary, to 31 percent in the U.S., to 66 percent in Spain.

The number of COVID-19 related deaths in long term care in Canada is at just over 5300.

The new research is said to offer valuable insight into a tragedy many families, caregivers and residents have been trying to illustrate since the pandemic began.

She says the findings suggest such measures could be key to mitigating the impact of a possible second wave.