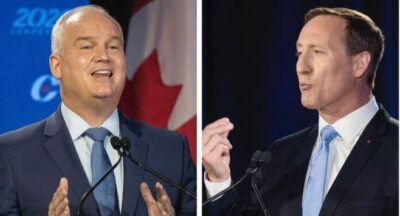 O’Toole’s campaign says it has filed a formal complaint with police seeking an investigation into MacKay’s organization.

The complaint involves the theft of confidential campaign and strategy data and alleges the O’Toole campaign’s systems were hacked earlier this week.

In a statement this morning, MacKay’s team called it “mildly amusing” to be on the receiving end of this accusation late on a Friday of what they believe was a “bad week for the O’Toole campaign.”

“It is not surprising that this is a tactic being trotted out the same week that Erin O’Toole performed very poorly in the debates in front of party members and Canadians,” the MacKay campaign said in their statement.

“Their campaign telegraphed immediately after the debates that they had given up on their unity message and were going to tear down their opponents as a desperate, last ditch strategy.”