Saying he’s ”disappointed” that China has now charged detained Canadians Michael Kovrig and Michael Spavor with spying for state secrets and intelligence, Prime Minister Justin Trudeau vows to make it clear with Beijing and allies around the world the importance of sending the ”two Michaels” home. 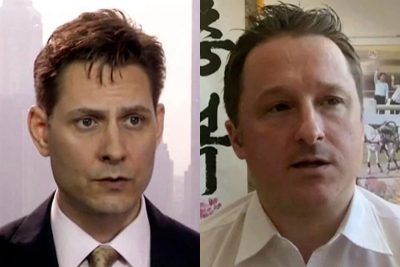 (Michael Kovrig (left), Michael Spavor / AP)
While not offering specifics, Trudeau says Canada’s doing all it can; publicly and behind the scenes, to pressure Beijing to release the pair.
”We have developed a certain expertise in what has worked to get Canadians home in very difficult circumstances over the past years,” adds the prime minister.
”In the case of the two Michaels, I can say that we are using a wide range of public and private measures to ensure that everything is being done to get these Michaels.”

Both men have been held since December 2018 in a move seen as retaliation for the arrest of senior Huawei executive Meng Wanzhou.

They’ve had no access to lawyers or  their families as of May, with the exception of a phone call the Chinese embassy said Kovrig was allowed to make to his sick father in mid-March.