It might not be long before restaurant patios open in some parts of the province, including here in Toronto.

Premier Doug Ford revealed on Wednesday that a decision on this will be made within the week, and that it will most likely be based on a regional approach.

Mayor John Tory is set to make an announcement at 10am Thursday related to the work the city is doing to help restaurant and bars expand and add patios once the province permits them to open.

“We are in active discussions with the province on some of the regulatory aspects of that patio plan and anticipate providing more details to you in the next few days,” Tory revealed on Wednesday, “An initiative that I believe will be of scale and therefore more helpful to business that are struggling in this sector.”

About two thirds of COVID-19 cases in Ontario have been confirmed in the Greater Toronto Area. 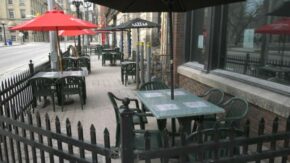 Restaurant and bar owners in Ontario were told back in March they would be temporarily closed for dine in service to reduce the spread of COVID-19. They’ve been allowed to continue operating takeout and delivery.

It is based on this principal, that food truck owners and ice cream vendors in Toronto are allowed to begin serving customers, as announced on Wednesday by the mayor.