U.S. CITIES BRACE FOR INCREASING UNREST AND CALL IN THE NATIONAL GUARD

Protesters set police cars ablaze, smashed businesses’ windows and skirmished with baton-wielding officers in streets from Atlanta to Los Angeles, as anger over George Floyd’s death spread across the country. 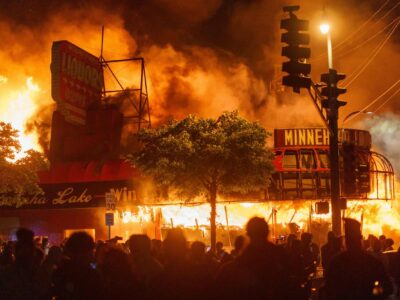 Authorities were bracing for more violence Saturday, with some calling in the National Guard to beef up overwhelmed forces.

In Minneapolis, where Floyd died Monday after a white police officer pressed a knee into his neck and kept it there for more than eight minutes, Minnesota Governor Tim Walz fully mobilized the state’s National Guard.

On Friday alone, more than two dozen cities experienced protests, many peaceful but some of which turned violent.

Many protesters spoke of frustration that Floyd’s death was one more in a litany.

U.S. President Donald Trump is urging Minnesota officials to get tougher with protesters who are destroying property and looting.

Trump spoke at the White House on Saturday after protests turned to rioting in some cities around the country.

He said by getting tougher, political leaders in Minnesota would be honouring the memory of George Floyd.

Trump said the U.S. military is “ready, willing and able” to assist.

He said “we can have troops on the ground very quickly if they ever want our military.”

Trump specifically called out the mayor of Minneapolis, Jacob Frey, saying the mayor “is probably a very good person, but he’s a radical, left mayor.”

Trump then described how he watched as a police station in the city was overrun, saying “for that police station to be abandoned and taken over, I’ve never seen anything so horrible and stupid in my life.”