PROTESTERS RALLY IN TORONTO AGAINST ANTI-BLACK AND ANTI-INDIGENOUS RACISM

Thousands of people took part in a rally on downtown Toronto streets on Saturday in protest of what organizers describe as anti-black and anti-Indigenous racism around the world. 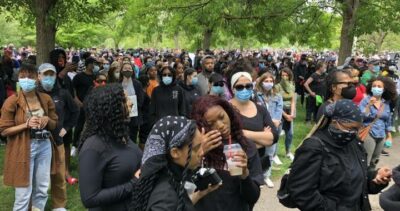 The protest, organized by a group dubbed Not Another Black Life, comes on the heels of high-profile, police-involved deaths in both Canada and the United States.

Some of the ensuing protests in the U.S. turned violent.

In Toronto, people chanted “not another black life,” “abolish the police,” and “no justice, no peace.”

Similar rallies are planned for Halifax later Saturday and Montreal on Sunday.

A Minnesota police officer is now facing a murder charge in the death of George Floyd, a black man caught on film pleading for air as an officer knelt on his neck.

And Ontario’s Special Investigations Unit is looking into the death of Regis Korchinski-Paquet, who fell from the balcony of a 24th-floor Toronto apartment while police were in the home on Wednesday.

A lawyer representing Korchinski-Paquet’s family says her relatives do not want to see violence, only answers as to how and why she died.

In a statement released Saturday, lawyer Knia Singh says the family did not organize or plan the protest.

The family says it thanks organizers for bringing attention to a “very serious matter.”

Toronto Mayor John Tory called the community’s anger over her death understandable, describing anti-black racism as “a fact in our society” and encouraging protesters to practice physical distancing in light of the ongoing COVID-19 pandemic.