Toronto’s medical officer of health is appealing to city residents not to let up on on our collective efforts to slow the spread of COVID-19. 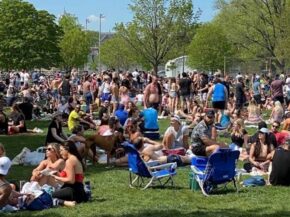 “We have all sacrificed for many weeks, isolating, staying at home as much as possible, exercising in physical distancing and all the other public health measures,” Dr. de Villa told CP24, “We’ve made good progress. We have averted disaster thus far. We have seen terrible situations in other jurisdictions. Thankfully that hasn’t happened here, yet.”

Dr. de Villa says let’s make sure we don’t lose the benefit of the sacrifices we’ve made, so that we don’t undo the progress in fighting the virus.

Toronto’s Police Chief Mark Saunders says the gathering of thousands who were not physically distancing was not a planned event, but happened in part because of the alcohol consumption which then led to people using nearby residential properties as places to go to the washroom.

City spokesperson Brad Ross was at Trinity Bellwoods on Sunday, and said city staff is working to reopen washrooms in public parks.

“But there was no excuse for the behaviour described, and we did write several tickets for public urination, “Ross explained, “It’s not something that we ever want to do obviously. If people are going to come to a park like this knowing that washrooms are not open, then they need to keep that mind when they do come to parks.”

Just four tickets were issued to visitors of Trinity Bellwoods on Saturday for disobeying the physical distancing bylaw.

Chief Saunders says they were much more prepared on Sunday, and as a result, the crowd scene was not repeated.