Toronto’s mayor says the weekend road closures as part of ACTIVE T.O. could become something that extends beyond the pandemic.

John Tory says shutting down some roads to vehicle traffic so people get out and bike, run or walk is a living experiment.

“A living experiment meaning we’re seeing in these very particular times if people use this and if it keeps them safe and acts as a safety valve in many different respects, and it will help us make decisions for the longer term as we go about doing that,” Tory told CP24 on Friday.

But the mayor says he knows for sure, based on last weekend, it’s a success so far. 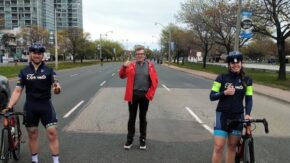 “There were thousands of people and they were from every age group and every part of the city and people were happy, they were enjoying themselves. They felt safe because they told me that,” said the mayor.

These are the closures as of 6am Saturday May 23rd:

River street between Gerrard Street and the Bayview Extension.

These routes will be reopened to vehicle traffic Sunday May 24th at 11pm.