While stage one of Ontario’s economic recovery begins after the long weekend, the province’s finance minister is hinting of what will be newly announced next week. 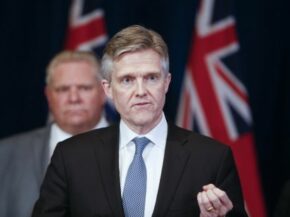 Rod Phillips says he knows we’re all waiting to hear if we can gather with family members who are outside of our households, along with the future of childcare and the school year.

“In the coming days, we will hear about additional adjustments based on the evolving health situation, including on social gatherings, childcare and education,” said Phillips on Thursday afternoon.

In Quebec, Premier Francois Legault has called off the resumption of elementary school in the Greater Montreal region until fall.

Ontario’s stage one starts Tuesday and will include the reopening of retail stores outside of malls, some recreational activities like tennis, pet grooming, construction, counselling, and curb side pick up at libraries.

Some scheduled surgeries and non-emergency diagnostic imaging will also resume.

As for whether City of Toronto summer camps will open this year, Mayor John Tory says parents can expect an announcement on this Friday afternoon.