The annual summer solstice event at Stonehenge has been cancelled because of the ban on mass gatherings in Great Britain. 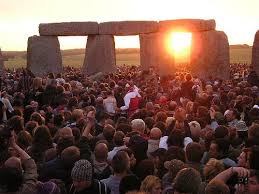 Usually some 10,000 people gather at the monument in Wiltshire, England on or around June 21st.

Stonehenge director Nichola Tasker says they are offering a live stream for people to stay in contact with what she describes as a spiritual place at a special time of year.

Senior druid King Arthur Pendragon. who compares the event for pegan’s with Christmas for Christians, says he’s disappointed but not surprised.

On the summer solstice, the sun rises behind the Heel Stone, the ancient entrance to the Stone Circle, and rays of sunlight are channeled into the centre of the monument.