A Cargill meat-processing plant south of Montreal is closing temporarily after at least 64 workers tested positive for COVID-19, marking the second time the company has experienced an outbreak at one of its facilities in Canada. 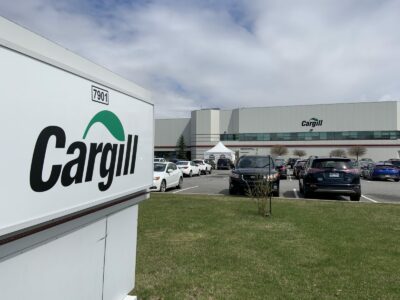 A spokeswoman for the union representing the workers says the plant in Chambly, Quebec, will close as of Wednesday so all its workers can be tested.

Roxanne Larouche says 171 workers were sent home last week as a preventative measure, and 30 of them have tested negative.

She says the workplace had implemented safety measures for employees, including installing plexi-glass between workers where possible, staggering arrival and departure times and providing masks, visors and safety glasses.

Cargill says the 64 workers represent 13 per-cent of the workforce at the plant. The company says three employees have recovered.

More than 900 of 2,000 workers at that plant have tested positive for the novel coronavirus.