While there are positive signs resulting from slowing the spread of COVID-19, there continues to be devastating news out of Ontario’s long term care homes. 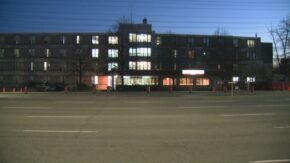 We are learning 43 residents of Camilla Care Community in Mississauga have died with the virus since an outbreak was declared there in March.

A spokesperson says a total of 152 residents have tested positive for COVID-19, up from 50 cases the facility reported April 29th. In addition, 42 staff at Camilla Care have also contracted the virus.

Camilla Care is located near The Queensway and Hurontario and is operated by Sienna Senior Living, which also oversees Altamont Care in Scarborough which has reported 46 COVID-19 related deaths among its’ residents. That’s also where personal support worker Christine Mandegarian was employed before she contracted the virus and died.

Three other long term are homes in the province are reporting more than 40 virus related deaths, Orchard Villa in Pickering, Eatonville Care Centre in Etobicoke and Forest Heights in Kitchener.

Meantime, complaints have been filed with the Ministry of Labour by union representatives for workers at the Ina Grafton Gage long term care home in Scarborough over concerns about staffing and infection control measures. But the result has not been satisfying for employees.

The home has seen 15 COVID-19 related deaths and 40 residents and 25 staff have been infected.

SEIU healthcare spokesperson Tyler Downey tells CBC Radio, the Ministry responded by conducting two investigations over the phone, before finding there were no issues.

And Downey says the company that manages the home is saying the phone inspections prove that all safety protocols are being followed.

The union has applied for an emergency hearing before the Ontario Labour Relations Board.

We are also finding out more about why Canada has the highest proportion of deaths from COVID-19 in long term care homes among 14 western countries.

As we reported in a Zoomer Radio/Classical FM exclusive on Monday, Canada, in addition to other countries, failed to step in quickly enough to stop the spread of the virus in long term care. As a result, 80 percent of COVID-19 related deaths in Canada have been in nursing and retirement homes.

Dr. Amy Hsu at the Bruyere Research Institute in Ottawa says a lot of it is because the rates of transmission in long term care are tied to the community transmission, and she says we’ve seen a lot of outbreaks in our metropolitan city centres.