It’s been a mainstay in Toronto’s Junction neigbourhood for more than 60-years. 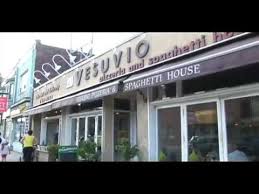 And now the family-owned Italian restaurant Vesuvio Pizzeria and Spaghetti House is shuttering its doors for good; a victim of the COVID-19 pandemic.

Co-owner Eddie Pugliese says the last day of operation for pick-up and delivery will be April 19th.

According to a statement on their Facebook Page, like many restaurants, the business has been affected by the crisis and after 63 years and Eddie says time has come to say farewell.

Pugliese says there were thinking of scaling back operations at the beginning of the year but when COVID-19 hit, they decided it was time to close for good.

According to the restaurant’s website, Vesuvio was the first New York-style pizzeria in Toronto, established on Dundas Street West in 1957.

The restaurant is also famous for fighting and beating the Junction alcohol ban. It was finally abolished in the year 2000.