As the COVID-19 crisis in Ontario focuses on outbreaks in long term care homes, an alarming new report reveals only 9 of 626 homes in the province received so-called resident quality inspections (RQIs) last year.

The provincial government website says each care home undergoes an annual inspection that includes interviews with residents, family members and staff, as well as direct observations of how care is being delivered.

A CBC News report says inspection reports from the last five years for all long term care homes in the province found that while most received a comprehensive resident quality inspection in 2015, 2016 and 2017, the number dropped to just over half in 2018 and just the nine in 2019.

That came as a surprise to Natalie Mehra, executive director of the Ontario Health Coalition, which has been lobbying for better regulations around long-term care in Ontario for 25 years.

“It’s incredibly frustrating to hear this,” she said. “We have been fighting for a regular, unannounced inspection each year for all of the homes since the 1990s, and we’ve won it, and then we’ve seen it deregulated, then we won it again.

“And then quietly behind the scenes, it stops happening again, and we have to fight and win it again.” 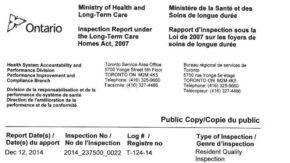 The inspections in long-term care homes fall primarily into two categories: complaint and critical incident inspections, which are reactive, and RQIs, which are broader and proactive.

In the case of critical incident inspections, homes usually know in advance that they will come under scrutiny.

But RQIs are more comprehensive and unannounced.