Toronto’s mayor is calling on the city’s police chief to launch a ticketing blitz to crackdown on those individuals who continue to gather in groups in public spaces during the COVID-19 pandemic.

“You know the concrete blocks we used to close down the cannabis stores when they were flouting the law?” Tory asked, “Well we’re going to use the concrete blocks to make it very clear that not only are those parking lots closed, but we’re going to make it such that you can’t open them by doing things you shouldn’t be doing, opening gates and removing barriers and so on.” 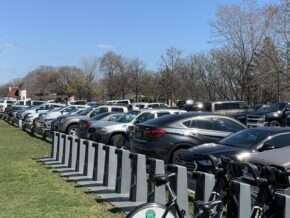 The barricades were moved aside Wednesday at Sunnyside Park, resulting in a full parking lot of cars.

City of Toronto Spokesperson Brad Ross posted on twitter that someone decided to remove the barricades and signs and essentially ignored the very serious efforts being made by all to halt the spread of COVID-19. He says police and the city are on it.

Police have started giving out $750 fines to people who gather in groups larger than 5 people on public property.

Mayor John Tory, along with Toronto’s Medical Officer of Health Dr. Eileen de Villa, and Fire Chief Matthew Pegg announced a series of orders on Wednesday to ensure people practice social distancing and don’t leave their homes for 14 days if diagnosed with COVID-19.