TOM HANKS & RITA WILSON OUT OF HOSPITAL, NOW IN SELF-ISOLATION WITH COVID-19

Tom Hanks and his wife Rita Wilson are in self-isolation in Australia after being released from hospital, five days after being diagnosed with COVID-19.

The 63 year old Oscar-winning Hanks says he has the “blahs,” but no symptoms of the virus. 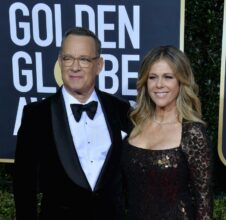 The couple arrived in Australia in late January on the Gold Coast where an untitled Elvis Presley biopic directed by Baz Luhrmann was to be shot. Hanks plays Presley’s manager, Colonel Tom Parker. The film has suspended production.

63 year old Wilson, an actress and singer-songwriter, performed in Brisbane and Sydney during the couple’s stay and before they were diagnosed with COVID-19.