Two New York opera stars made sure the show went on, albeit in an unusual format and venue, with a live-stream from the living room of mezzo-soprano Joyce DiDonato’s apartment in New York City. 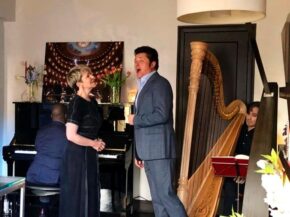 Polish tenor Piortr Beczala along with DiDonato had been scheduled to star in Massenet’s “Werther” at the Metropolitan Opera starting Monday night.

But, The Met met is shuttered which caused the cancellation of the first five performances through March 31st.

Not only did they entertain, the opera stars also used the live-stream to ask for donations to the American Guild of Musical Artists relief fund.