IT WAS ANOTHER SUPER TUESDAY FOR JOE BIDEN 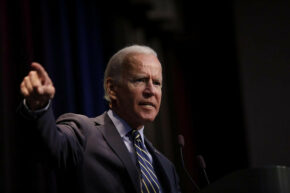 Speaking in Philadelphia, Biden took on a much more conciliatory tone toward his rival.

“We share a common goal, and together, we’ll defeat Donald Trump,” Biden told a gathering of supporters in Philadelphia.

Biden even used one of Bernie Sander’s key phrases, “affordable healthcare, total healthcare, not a privilege but a right.”

Biden noted that many had declared his candidacy dead only days ago, but added “now we’re very much alive.”

He asked supporters of his democratic rival, Bernie Sanders, to back him going forward.