NUMBER OF COVID-19 CASES IN ONTARIO JUMPS BY FOUR

Four new positive cases of COVID-19, three in York Region and one in Toronto, have been confirmed by provincial public health experts. This brings the total number of cases of the coronavirus to 15, with three resolved.

All four of the new cases are said to be people who’ve had a history of travel to countries where the virus has spread. 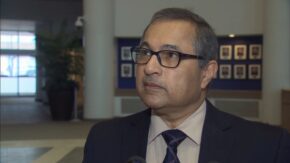 “Containment means we’re going to actively identify all of the context, make sure they don’t have a chance to develop symptoms of the disease when possible, and that exposure to the broader society is controlled,” Kurji explains, “So the virus is not circulating in the community. These are all travel related instances.”

An update on all of the cases is expected Monday from the province’s chief medical officer of health, Dr. David Williams.

In the United States, at least eighty cases of COVID-19 are now confirmed.

New York, Illinois and Rhode Island have their first cases while the numbers seem to be spreading in California, Oregon and Washington state.

Researchers said earlier the virus may have been circulating for weeks undetected in Washington state, where 2 people have died of COVID-19.

Meantime, China is reporting its lowest number of new virus infections in six weeks while hundreds of patients in the stricken city that is the outbreak’s epicenter are being released from hospitals.