1000 VIA RAIL WORKERS TEMPORARILY LAID OFF DUE TO INDIGENOUS BLOCKADES

Temporary layoffs have hit VIA Rail, as blockades in B.C. and Ontario (near Belleville) have brought passenger rail service to a virtual standstill.

A statement from VIA says 1000 people are receiving notices regarding this matter.

The thousand temporary layoffs have been confirmed by VIA’s largest union Unifor.

Earlier in the week on Tuesday, a statement from CN Rail said 450 employees would be temporarily laid off.

Conservative Leader Andrew Scheer grilled the prime minister about the layoffs in the House of Commons.

“They still have bills to pay, so can the prime minister tell them, on what day will the blockades come down?” questioned Scheer.

“We know that an overly aggressive approach like the one proposed by the leader of the official opposition will only to more challenges down the road,” explained Justin Trudeau, “But I do agree with the leader of the opposition on one thing. This situation is unacceptable in the fact that it’s hitting Canadians so hard, facing layoffs, facing shortages. That’s why we’re doing everything we can to resolve this peacefully.”

Indigenous protesters and sympathizers have formed blockades in opposition to the construction of the Coastal GasLink pipeline in northern B.C. on the grounds that it would run through the hereditary land of the Wet’suwe’ten people. 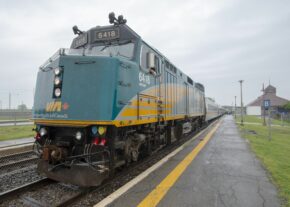 Regular VIA service is set to resume in southwestern Ontario Thursday, along with partial service between Montreal and Ottawa. Plans for partially restored service on the Quebec City-Montreal-Ottawa corridor have been postponed until at least Saturday.