The perceived front runner in the federal conservative leadership race may be at odds with some of his strategic advisers. 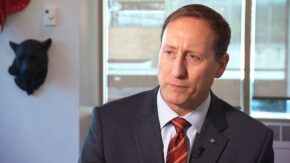 The reporter picked up on MacKay’s promise to be more civil, and she asked, “is it civil to post this tweet?”

“No it isn’t and that was something that happened that I’m not proud of,” MacKay responded, “I don’t have the opportunity to vet every single thing that goes on that social media account, so we’re going to do better.”

It was then that MacKay’s media handlers shut down the interview, although MacKay defended the reporter, saying she was just doing her job.

MacKay had his own expense controversy when as minister of defense he used a search and rescue helicopter to pick him up from a fishing lodge at a cost of an estimated $16,000.

Peter MacKay is one of seven candidates who’ve officially declared their intent to try and succeed Andrew Scheer.

A new leader will be chosen at a Toronto convention June 27th.