One of the few remaining Navajo Code Talkers, who used their native language to confound the Japanese in World War II, has died. 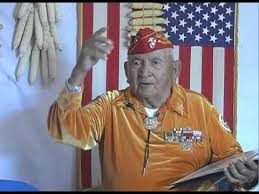 Joe Vandever died in New Mexico over the weekend at the age of 96.

Tribal leaders called him a great warrior and a compassionate family man who was among hundreds of Navajos who served in the U.S. Marine Corps.

Their job was to transmit messages using a code based on the Navajo language and his death leaves less than a handful of Navajo Code Talkers still alive.

The code was never broken.