The 44th president of the United States was in Toronto yesterday expressing his thoughts on climate change and Canadians. 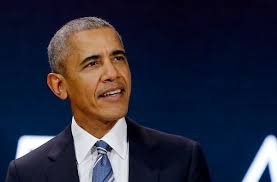 Barack Obama told a forum on the future of work that while there are divisions in Canadian politics, Canada is a place where you can still have reasoned argument and facts still matter. To applause, he added, that is something to be preserved and cherished.

He also thinks it will take a surge of citizen energy to persuade governments and big institutions to tackle climate change, suggesting the younger generation has lost faith that their elders can fix the problems.