A male pedestrian who was hit in a fail-to-remain collision Tuesday morning in Brampton has died of his injuries.

Peel Police say he was struck by a vehicle near Rutherford and Orenda Roads and later died in hospital.

Investigators confirm the driver involved left the scene. So far, there is no description on the suspect vehicle.

There has been a second deadly pedestrian collision in the GTA this morning. 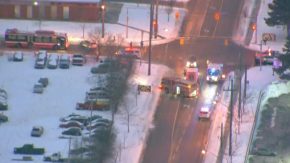 (A pedestrian was struck at Allness Street and Supertest Road in North York on Jan. 21, 2020. PHOTO CREDIT: CITYNEWS)

A woman was killed around 7 o’clock Tuesday morning, when she was hit by a tractor trailer at Allness St. and Supertest Rd. near Dufferin Street and Steeles Avenue. The driver of the tractor trailer failed to remain. The victim was pronounced dead a short time later.

In June of last year, Mayor John Tory announced Vision Zero 2.0, an updated version of the city’s three-year-old plan that has, so far, failed to reduce the rate of traffic-related incidents in Toronto. In 2019, 42 pedestrians died on Toronto’s streets. The deadly year has left advocates, citizens, and politicians furious at the city’s inaction, with many advocates calling the new initiative too timid.

Vision Zero is a concept that did not originate in Toronto. It is a set of programs and policies that aim to reduce a municipality’s pedestrian deaths to zero. Cities around the world, such as New York and Edmonton, have had success implementing Vision Zero policies.

The idea is to transform the perception of pedestrian deaths. They should be seen as preventable incidents, not accidents.