An investigation into what police call an inter-provincial organized crime network between Manitoba and Ontario has led to 10 arrests and the seizure of vast quantities of drugs, cash, contraband cigarettes and luxury vehicles. 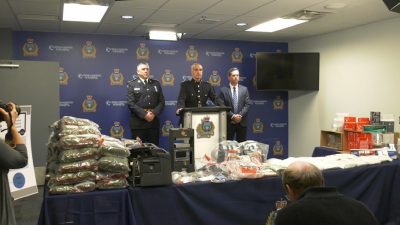 Police began the investigation called Project Highland last April and looked into shipments of cocaine, opioids and significant amounts of illegal marijuana and tobacco from southern Ontario into Winnipeg.

The probe which grew to include the Winnipeg Police Organized Crime Unit, Ontario Provincial Police and Manitoba Finance and Taxation, led to eight searches in Winnipeg, rural Manitoba and Ontario on December 18th.

Police say that among the items seized were hundreds of rounds of small and large-calibre ammunition.

More than 30 charges that include conspiracy and trafficking in a controlled substance were laid.

Of the 10 adults charged, five are from Winnipeg, one is from the Rural Municipality of Tache in southern Manitoba and one each from Calgary and the Ontario cities of Aurora, Whitby and Stouffville.