A former SNC-Lavalin executive will be back in court for sentencing on Thursday after being found guilty of five charges, including fraud, corruption of foreign officials and laundering proceeds of crime. 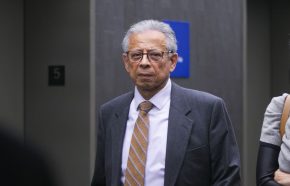 The Crown had accused 73-year-old Sami Bebawi of paying off foreign officials and pocketing millions as he worked to secure contracts for the Canadian engineering company in Libya.

Bebawi is so far the only person convicted in Canada in connection with a wide ranging investigation by Canadian and Swiss police into SNC’s business activities with the regime of the late Libyan dictator Moammar Gadhafi in the early 2000s.

Montreal based SNC-Lavalin has also been charged with bribery and fraud as a result of the police probe into its past business in Libya. That is the focus of a separate trial likely to take place next year, barring an intervention by the federal Attorney General.

Earlier this year, the Trudeau Liberals were embroiled in controversy over allegations that Prime Minister Justin Trudeau and senior officials put pressure on Jody Wilson-Raybould, then-justice minister and attorney general, to overrule federal prosecutors in favour of offering SNC a deferred prosecution agreement.